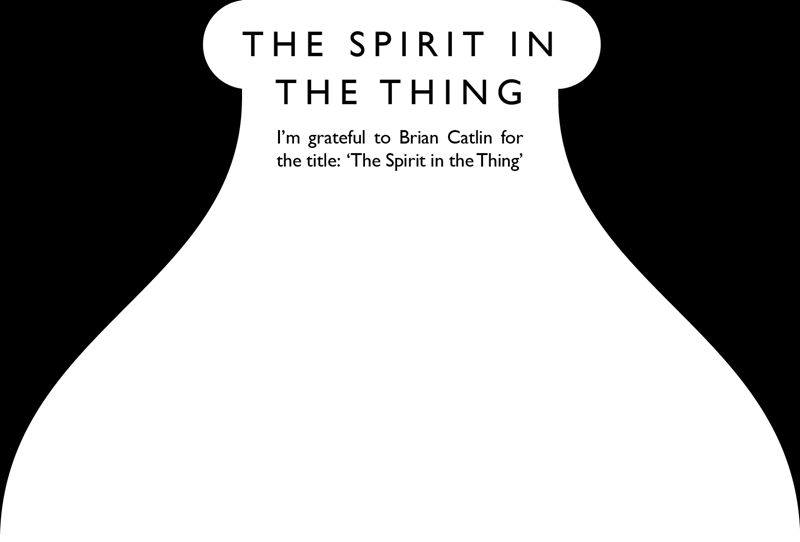 We’ll start by assuming that, in this context, ‘thing’ means an inanimate object. ‘Spirit’ is harder to define. Some kind of energy, or power, perhaps, like the charge in a dry cell. All things, by their very existence, have the potential to generate in a receptive human subject “gnosis”, knowledge or revelation. Perhaps the spirit in the thing is the quality and quantity of gnosis latent in it, waiting to be recognised, expressed, extracted. An inanimate object is something made of matter – solid, liquid or gas. Scientists are able to extract the objective, physical energy latent in matter. But there is a subjective, psychological energy in matter, too. ‘Numinous’ objects are objects which, due to the conjunctions of form, substance, and context which define them, possess this energy to an unusual degree. Such an object may be purpose-built, in other words, ‘art’ — or it may be, like the paradoxically elusive Philosopher’s Stone, “the commonest thing to be picked up anywhere.”

In either case, a receptive subject is required, someone sensitive to the subtle summons emanating from the object, in order to extract the energy latent in it. The same object will be perceived differently by different subjects. I realize this is merely another way of saying “beauty is in the eye of the beholder” which isn’t news or particularly useful or interesting— but consider the sophisticated perceptive strategies advocated by 2 poets, whose differences in other regards make the congruence of their views on how to view an object all the more striking.

First, the Portugese poet Fernando Pessoa, born in 1888:
“My vision of things always suppresses in them that which my dreams cannot use. …
Sometimes the best way to see an object is to annihilate it, but it still subsists, how I have no idea, made out of the very matter of its negation and abolition;… .”
(The Book of Disquiet)

Next, the American, Theodore Enslin, born in 1925:
“I see only the husk — the outside of any perceived object which has more than a single dimension — and this limits me to the ‘real’ world except in recognition of other possible worlds. Thus I do not actually perceive very much. This applies to all senses equally, and it fixes me in the place where I am able to perceive what little is possible for me. Meister Eckhart wrote, ‘If you want the kernel, you must break the shell,’ but this does not solve the problem. If I do break the shell, I perceive merely the outside of the kernel — to the center I have cleared away certain impediments, but I am still confronted with the outside of an object, albeit below the original surfaces. The problem is not in breaking the husk, but in doing away with dimensions, and in the process developing other senses of perception which can deal with the absence of what is necessary to present perception — ”
(quoted in Io/5, Doctrine of Signatures, 1968)

The gnostics believed that the material world was “the true seat of evil, full of active energies and hostile powers.” They were right in a way. From both a scientific and a poetic perspective matter is full of active energies and powers, with the potential for both good and evil. Gnostics also believed that, as a man “…has raised himself… out of the material world, or has been set free by higher powers, so also shall the portions of light still imprisoned in matter be set free.”1
Interpreting that sentence as if it were an allegory, I’d say the “material world” which I want to raise myself out of is the world seen through what William Blake, something of a Gnostic himself, called the “vegetative organs” of sight — a habit-bound mode of perception that sees only husks and surfaces. The “higher powers” which deliver me from this blinkered vision of a dead world are those of the creative imagination. You probably know the. saying : “seeing something clearly means to forget its name.” Perhaps that’s part of the ‘annihilation’ Pessoa and Enslin prescribe. Defamiliarized like that, “the portions of light still imprisoned in matter” are set free. And this “light” in matter is another name for the spirit in the thing.

I’ve said that the ‘thing’ in this context is inanimate. But, perhaps the spirit in the thing might be described, metaphorically, as a kind of life. Consider this excerpt from a letter by D. H. Lawrence:
“We have to choose between the quick and the dead. The quick is God-flame, in everything. And the dead is dead. In this room where I write, there is a little table that is dead: it doesn’t even weakly exist. And there is a ridiculous little iron stove, which for some unknown reason is quick. And there is an iron wardrobe trunk, which for some still more mysterious reason is quick. And there are several books, whose mere corpus is dead, utterly dead and non-existent. And there is a sleeping cat, very quick. And a glass lamp that, alas, is dead.”

Compare with this passage by Guy Davenport: “…science and poetry from the Renaissance forward have been trying to discover what is alive and what isn’t. In science the discovery spanned three centuries, from Gassendi to Niels Bohr, and the answer is that everything is alive.” Davenport also quotes Einstein: “…every clod of earth, every feather, every speck of dust is a prodigious reservoir of entrapped energy.”2

The German poet, Rilke, wrote a poem called “How the Thimble Came to be God” in which he insisted that all things are quick and that “anything can be God.” God is in things — in Michelangelo, in the marble and in the thimble — not above them, immanent not transcendent.”3

Rilke can call it God, and Lawrence, “the God-flame in everything”— personally I’m an atheist. Yet I’m a firm believer in the potential, latent in form and matter, to generate “gnosis” or revelation. My belief is founded on experience, an encounter with an object, or more accurately, with a substance, that 25 years later I’m still obsessed with. In that time I’ve amassed a large anthology, or a small museum, of quotes and pictures on the subject, with no sense that I’ve reached anything like an ‘end’ to it. The subject is milk. 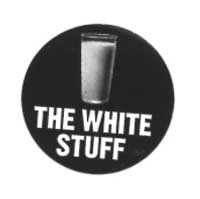 The stuff which is currently being promoted in the U.K. as “THE WHITE STUFF.” The luminous stuff in the glass which Cary Grant takes upstairs in Hitchcock’s film, “Suspicion.” Or which Charles Simic evokes in a poem called “Return to a Place Lit by a Glass of Milk.” The glowing glass of milk is a numinous object. It provides us with a framework for our interrogation of milk. The quotes we seek appertain not only to the substance, milk, but also to:

A selection of these may be seen in the MILK MUSEUM.

1 from article on Gnosticism in The Encyclopaedia Britannica, 14th edition, 1932
2 from Olson, in The Geography of the Imagination
3 based on William Rose’s Introduction to Stories of God by R. M. Rilke