Objects proliferate as never before, but they are mostly dead husks, the shells of things, wherein no daemon1 resides. We own them merely, or covet them, we are not nourished. Meanwhile, the fundamental appetite for numinous2 objects grows ravenous. Nevermind that it remains unconscious in most citizens and unacknowledged by the authorities. Only numinous objects can make possible the communication between people and so-called ‘dead matter’3 which must be established if we wish to avert calamity.

I am not here referring to fetishes, which are a means to evoke a system of belief and not properly ends in themselves. Nor am I referring to fantasy-constructs like, for example, the ship made of fingernail-parings described in Norse mythology. This ship is undeniably a fine thing, but it is only feebly numinous compared to a block of sodium in a meadow, its edges mollified by the tongues of cows into a lopsided loaf like snow. And, while my more sceptical readers may scoff, it is a fact that if this salt-lick be removed from the meadow and placed in a confined enclosure or, better still, sealed into a lead container, its numinous charge will be boosted many fold4. It may be, as some have theorized, that the object, ‘au naturel’ or in its ‘accumulator’5 is numinous to the degree that it functions as a ‘mirror of the spirit’, to the degree that you or I can imaginatively see something of ourselves, something we do not ordinarily have a name for or an image of, made objective in it. That salt can function as a mirror of anything, especially when sealed in lead, will smack of blatant hocus-pocus to the sceptics – but it is in such unlikely ways that the imagination actually works.

A numinous object is charged like a condenser. It distorts induction and resonates ambiguously. In Surrealist parlance it is ‘convulsive’, with the power to abrogate definition from its surroundings and become the solitary and radiant focus, the omphalos or navel, of an entire world. An object with sufficient numinous charge can stop time.

The numinous objects which already exist in our environment are easily overlooked by our harassed and addled species. Education is the remedy, teaching people of all ages to resist distraction and become sensitive to the subtle radiation emanating from these items (which often masquerade as common refuse on the street). I imagine students returning, bright-eyed and exultant, from expeditions to dumps, factories, zoos, firing-ranges, hospitals, quarries, ships, farms, forests, cinemas, circuses, cemeteries, and recording studios with their eclectic spoil. Objects thus collected would be tested, graded and catalogued before being made available to the public from a chain of lending libraries.

Besides numinous ‘found objects’, fresh numinous objects must be manufactured. To meet this need a new science is being evolved here at the offices of Amateur. The Morphological Tables illustrate the first phase of this work: discovering the morphologies or forms most conducive to numinosity. I am still compiling the list of materials of which these forms or objects might be compounded. The selection is vast, and the distinction is critical, in terms of numinosity, between a ball, let us say, of snow, and one the same size, made of, for example, soluble glass6 – although both balls, viewed from a certain distance, might otherwise be twins.

How would an alchemist seeking the lapis or Philosophers Stone picture it in his mind? (The Tractatus aureus says the precious Stone is “altogether vile”, but aside from that…) Would he imagine an amorphous lump, a perfect sphere, or a brick? Would it be oily or dry, dull or polished, cold or warm to the touch? Would it be fused into a dense solid, or porous, ventilated like a honeycomb? Such grossly materialistic speculations demean the spiritual associations the stone evokes, no doubt, but in seeking the recipe for numinous objects I have found it useful to ask myself such questions… To return to the morphologies – I have deliberately restricted the choice to basic forms and objects, at least for my first tentative experiments. If an object can be inserted into the phrase “the object is ________-shaped”, (e.g. cigar, bullet, barrel, or teardrop-shaped) it will usually qualify for selection. Other objects qualify as nearly archetypal “signs for themselves” (e.g. gallows

7). It is a basic “building block” quality that I seek. Certain forms, by their inclusion, automatically disqualify others. Hourglass, for instance, renders dumbbell superfluous, because the latter

is too nearly the former on its side.

Many forms and objects are missing that should be included. Should more letter-shapes qualify? L,T,V,O,S,U,X and Z now seem to me all to be basic forms, maybe the rest are too. Sometimes I wonder if a numinous object could not therefore be a word…

It may transpire that unless I find the appropriate context in which to place a finished object, it will not “convulse”, its numinosity will remain dormant. Conventional gallery design since the middle of the 20th Century would indicate that the aesthetic qualities of an art object are supposedly savored best in an antiseptic interior and under electric lamplight. But an object such as I propose to manufacture, and which I do not think of simply as “art”, might require a specific site, a specific hour of day or night, specific support “props”, weather conditions, and so on before “its soul, its whatness, leaps to us from the vestment of its appearance”8 and it becomes numinous.” 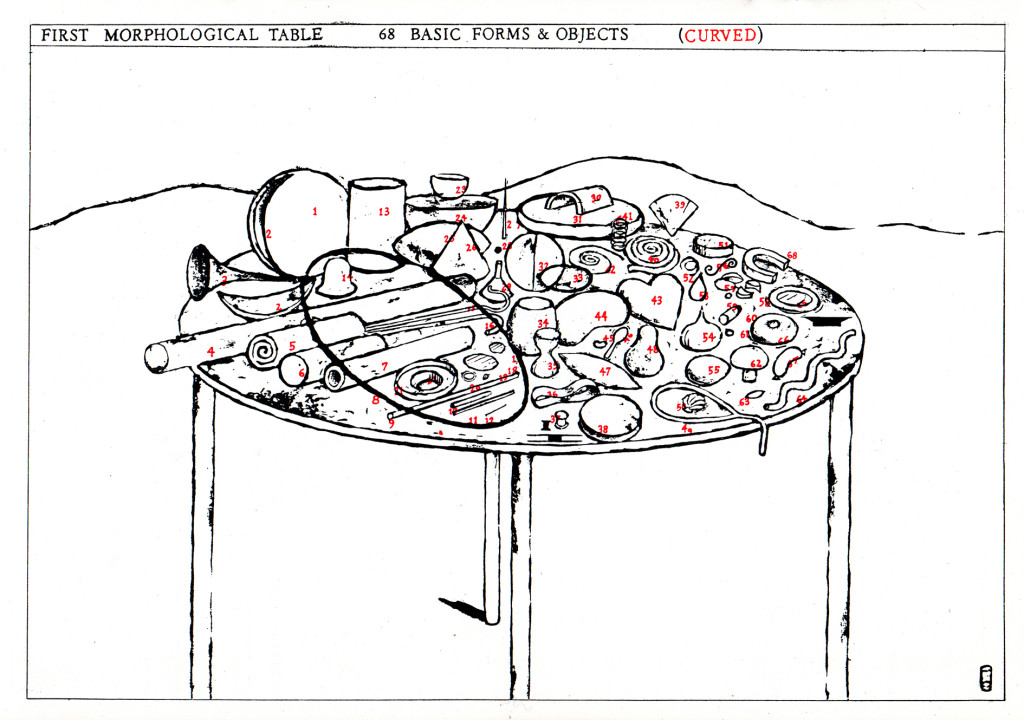 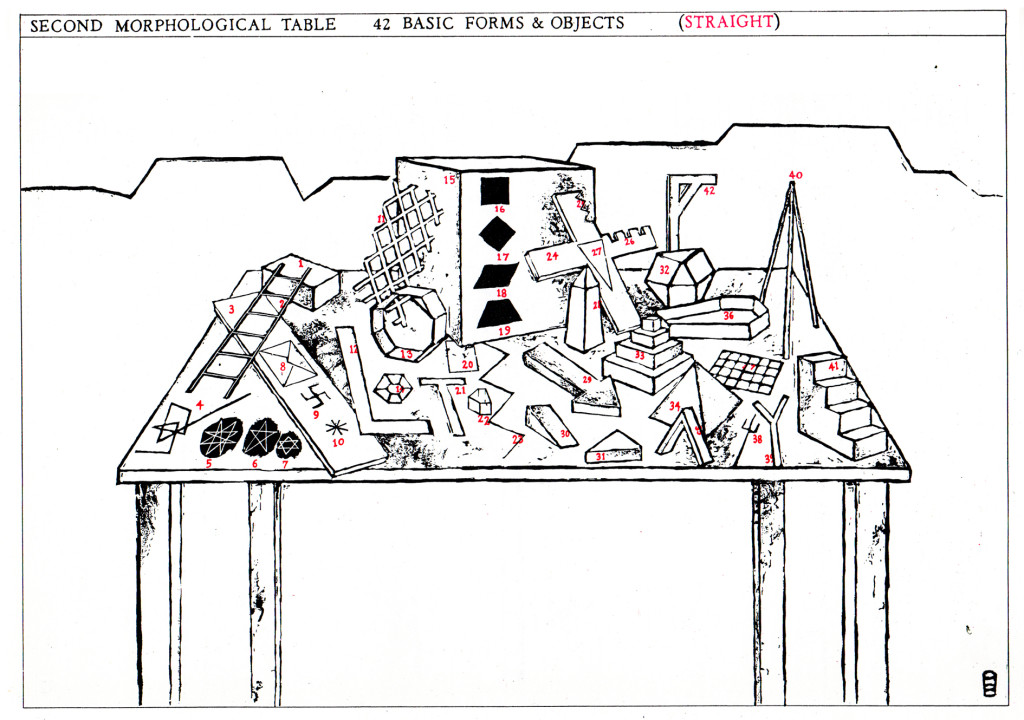 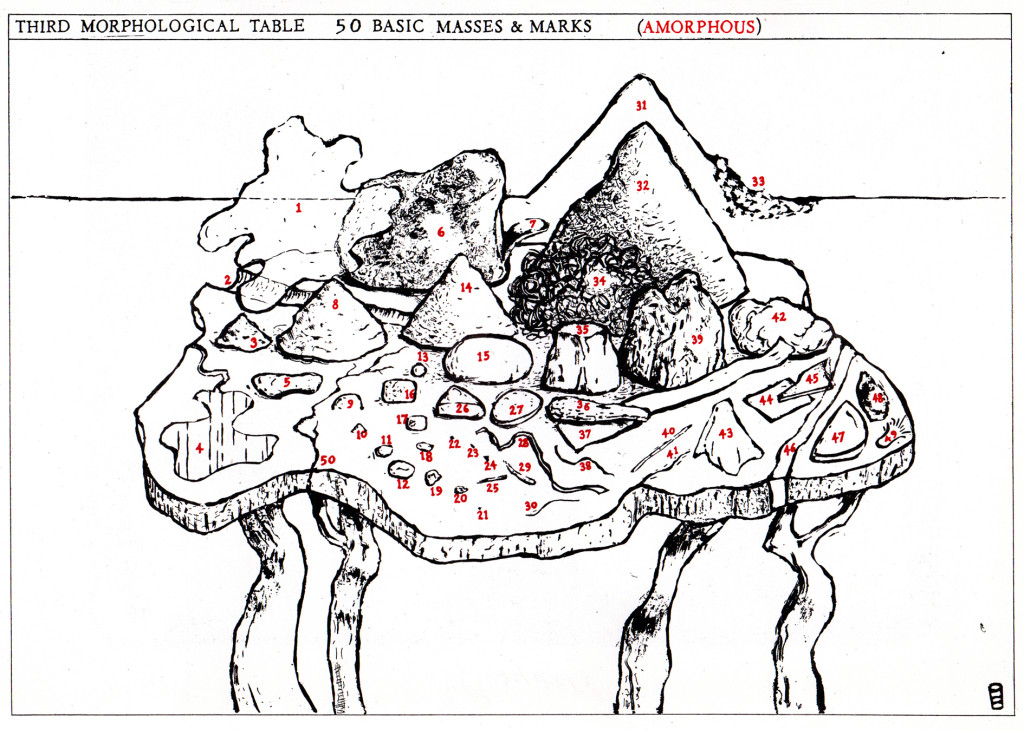 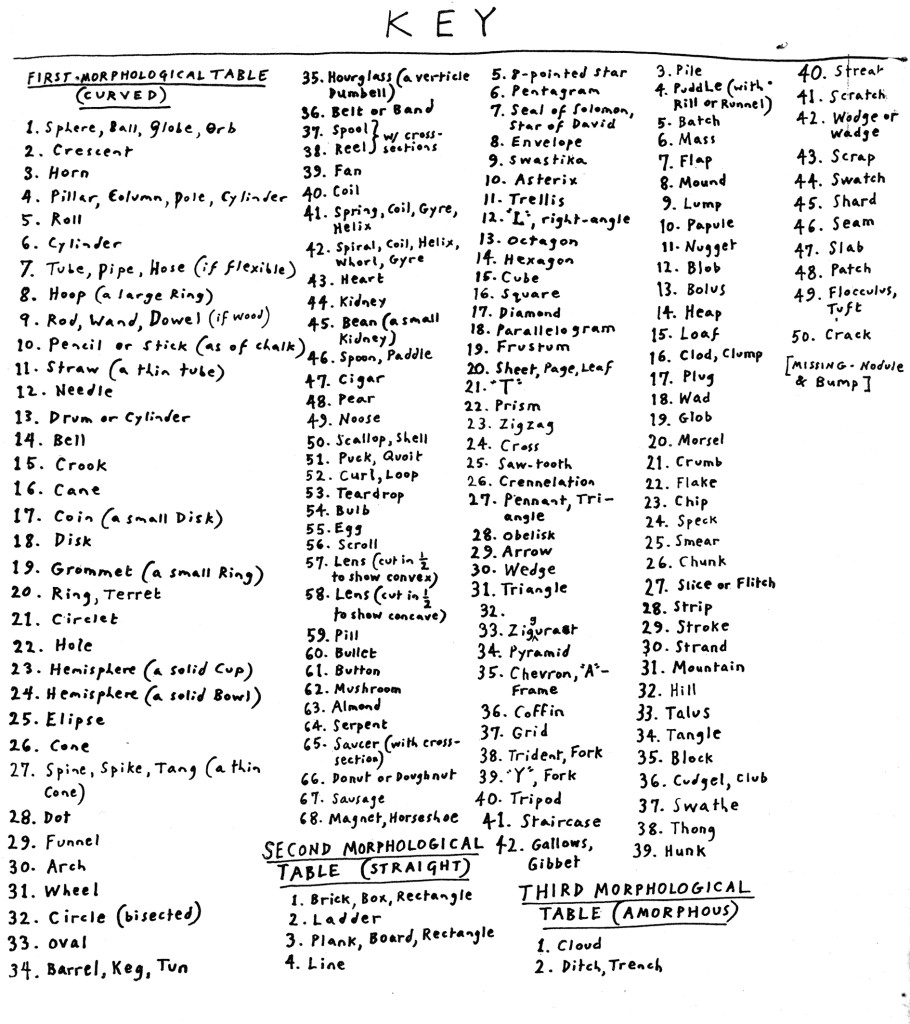 1 Daemon – the animating spirit of a place or thing. Cf. the painter, Giorgio de Chirico’s dictat: “One must discover the daemon in everything.”
2 Numinous – invested with power or spirit.
3 Guy Davenport: “…science and poetry from the Renaissance forward have been trying to discover what is alive and what isn’t. In science the discovery spanned three centuries, from Gassendi to Niels Bohr, and the answer is that everything is alive.” Davenport also quotes Einstein: “…every clod of earth, every feather, every speck of dust is a prodigious reservoir of entrapped energy.” (from Olson, The Geography of the Imagination)
4 Cf. Leonora Carrington: “The explosion… had momentarily dispersed the powers that always gathered around the Cup in enclosed areas. This is a magic law and true for nearly all charged objects.” (from The Hearing Trumpet)
5 Cf. Wilhelm Reich and his “accumulators” and “boosters” (of “orgone energy”).
6 One reason the list of materials is potentially endless is that science keeps inventing new, potentially numinous, matter. Dr. Cyril Drake, for example, “accidentally made a glass that dissolved in water.” “Without silicon, using phosphorous, calcium and sodium oxides”, the ingredients in Dr. Drake’s soluble glass can be adjusted to make it dissolve as swiftly or as slowly as required, “from a few minutes up to ten years.”
7 House not pictured in the Second Morphological Table.
8 James Joyce, describing the “epiphany” of an object.