The human mind is often stirred by what might be called the encyclopaedic urge, the thirst to know everything.

There are two approaches one can take to quench this thirst:

For almost thirty years I have taken the latter course, immersing myself in milk, amassing a macaronic museum of quotes and a morgue of pictures pertaining to the stuff in the belief that a sufficiently obsessive study of one thing will eventually result in a complete education about everything. 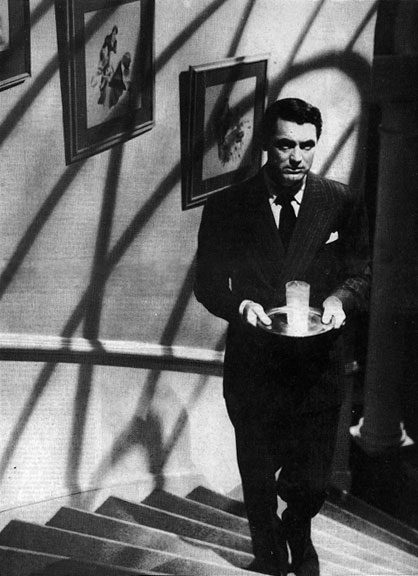 In 1971, aged 19, I got so depressed that my parents arranged for me to see a therapist, a compassionate listener who smoked a cigar while I droned on about my anxiety and alienation. He told me I was going through an “identity crisis.” I didn’t know who I was.

I was almost disappointed when the therapist told me that I wasn’t going crazy, I was simply immature.

It was at this time and in this susceptible state that I picked up François Truffaut’s book, Hitchcock, and chanced upon the following exchange:

A.H. …By the way, did you like the scene with the glass of milk?

F.T. When Cary Grant takes it upstairs? Yes, it was very good.

F.T. You mean a spotlight on it?

A.H. No, I put a light right inside the glass because I wanted it to be luminous

On reading those words I experienced what psychologists call an apophany, an abnormal consciousness of significance.

Italo Calvino:
“I understood that the object contained a message for me, and I should decipher it”1

Conscious effort was not the appropriate response to what was a summons to the unconscious. I proceeded by a kind of somnambulism. With the infinite patience of idleness, I collected quotes which seemed to elucidate or compound the mystery, jotting them down when I came across them in the course of my general reading. Objective corroboration by a host of disparate authors confirmed my unconscious hunch: Hitchcock’s glass was luminous because its contents were numinous.

E. Newton Harvey, A History of Luminescence:
“The appearance of light without fire or without heat is immediately imbued with a supernatural significance.”

When Hitchcock put a light inside the glass (“because I wanted [the audience] to think it was poisonous”), he produced a kind of anti-light, with properties normally associated with darkness. A cold, wet, colourless light, which hid more than it made visible.

This would not have been the case had the glass contained any other liquid – even such association-rich fluids as wine, blood, ink, oil or water. These are all outgoing, extrovert substances. In Cocteau’s film Orphée, Jean Marais takes dictation from the radio in Death’s Rolls Royce. One of the enigmatic transmissions he receives is the phrase “a single glass of water lights the world.” A world lit by H20 would be a daylight world of sparkling clarities, at the opposite end of the spectrum from the world a single glass of milk illumines with its anti-light: an inner world of shadows, where there is “more reality in what is hidden than in what is visible” (Gaston Bachelard, La Terre et les reveries du repos).

Like whiteness, milk is antithetical. Beneath the surface guise of purity, innocence, strength and calm lies another milk, “phosphorescent from all its encounters with darkness” (Antonin Artaud). Just as “the deep secret of innocence is that it is also anxiety” (Kierkegaard), so the deep secret of milk is, in the words of French poet Jacques Audiberti, its “secret blackness.” By putting a light in it, Hitchcock demonstrated that the seemingly innocuous stuff can be sinister, its cold glow radioactive after its long journey up from the depths, a chthonic “blood mystery”, an occult narcotic, a photosensitive emulsion, a weird glue related to sperm and ectoplasm, its whiteness connoting not only innocence and purity, but also, like Moby Dick’s, corruption and vacuity.

In The Archetypes and the Collective Unconscious, Carl Jung writes: “With the decline of alchemy the symbolical unity of spirit and matter fell apart, with the result that modern man finds himself uprooted and alienated in a de-souled world.” “It seems as if it were only through an experience of symbolic reality that man, vainly seeking his own “existence” and making a philosophy out of it, can find his way back to a world in which he is no longer a stranger.”

My immersion in milk aspires to be an experience of that order, and was undertaken with that aim. Deciphered, Hitchcock’s glass seems to me a symbol of spirit and matter reconciled, a symbol of wholeness. Alchemy’s stated aim of transmuting “base” matter into gold was a cover for its occult agenda: the transformation of the alchemist. Likewise, my aim was not only to transform Milk by the alchemy of language, but, like Pinocchio, to be transformed — to shed my immaturity, to grow up.

Habit inures us to the true weirdness of the world and of our being in it. Of all the mysteries we take for granted, our ingestion of matter and our translation of it into ourselves ranks among the strangest. The physical transformation of food into living tissue and energy is practiced by all terrestrial life-forms, but the metaphysical transformation of foodstuffs into signifiers invested with symbolic meaning and magic powers is, as far as we know, a uniquely human act.

The biological name for our class of animal, Mammalia, is derived from the gland which gives milk. On land, the first act of the newborn mammal is to draw breath. But the next is to seek the mammary gland.

Although there are always exceptions (one of the most chilling being the Indian practice of dudhputii — the drowning of baby girls in milk) the adoration which a newborn baby inspires in most families is tantamount to worship. If babies are gods than milk is their ambrosia, often their sole and sufficient food.

Because we tend to idealize childhood, and because milk has such strong associations with it, milk can sometimes seem like the translation into matter of innocence itself.

Margaret Visser, in Much Depends on Dinner, points out that
“Milk and honey are the only substances people commonly eat which are created by animals specifically to feed their young.”

And, she adds:
“In North American culture nothing bathed in fresh milk can be threatening or bad.”

Cornflakes, for instance, are
“hallowed by Milk, which always says ‘Mother.'”

This C19th “little song for little singers” is addressed to the other parent:
MILK SONG

“Father it is thy kindness
Gives us milk to drink,
Milk, how pleasant tastes it,
Very good we think.
In the cup or basin,
It is white as snow;
Sweet as the flowers
In the fields grow.
Milk the red cheek freshens,
Makes the mind serene,
Beautifies the sunshine
Brightens all the green.
Yes, it is thy kindness
Ever great and good,
Gives the milky treasure,
Children’s sweetest food.
Father, may we never
Be denied this food;
Nor seek after other
While this is so good.”

“The pure whiteness of milk was a matter of considerable wonder to all peoples, and is repeatedly alluded to in the folklore and riddles of the world.” (Encyclopedia of Esoteric Man, Benjamin Walker).

It’s whiteness proclaims milk’s virginal virtue. Or does it? Under examination its presumed innocence proves to be a “whitewash” concealing a multiplicity of alternative readings. Some of these cling to milk by associative contagion with the breast, which, as Marilyn Yalom writes, “…has been coded with “good” and “bad” connotations since the beginning of recorded time.” The “good” breast has the “power to nourish infants, or, allegorically, an entire…community.” The “bad” breast “is an agent of enticement and even aggression.”2

Like the breast, the colour white is profoundly antithetical. As Rudolph Arnheim puts it:
“White… has a peculiar two fold quality. On the one hand, it is the supreme fulfillment, the integration of all the richness to which particular colours can add up. But on the other hand, it is also the absence of hue and therefore of life. It has the purity of the innocent, who have not yet lived, and the emptiness of the dead, for whom life is over.”
Rudolph Arnheim, Art and Visual Perception

A dialectic every bit as extreme as that which causes “white” to oscillate, to flicker stroboscopically between positive and negative values, is also at work in milk. This dialectic makes milk a “convulsive” emulsion, a potentially numinous matter.

1 If On a Winter’s Night a Traveller
2 Marilyn Yalom, The History of the Breast, p. 4