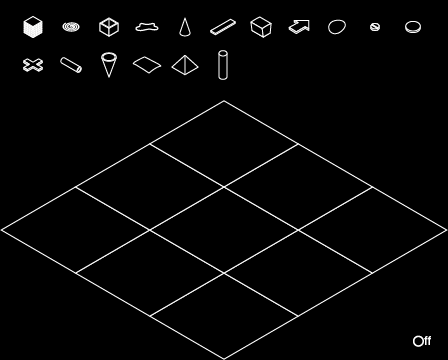 Discussions about numinosity at Amateur Enterprises often centre around the importance that context and combination must have to any possible theory of numinosity. This led to the idea for the design of a ‘game board’ and a set of objects as a means of studying the effects of proximity and configuration on numinosity.

The underlying model of the Proximity Machine has the following rules:

1. An object holds both negative and positive numinous charges (an equal balance being found in inert objects.)

2. Some objects are capable of emitting charge that can be absorbed by other objects in close proximity and thereby increasing the potential charge of those other objects.

3. Some objects are capable of draining the charge from other objects close to it.

4. There is no fixed relationship between 2 and 3. A limitation of the board is that objects can only be moved horizontally and vertically and not over other objects. The working schematic of the board, above, includes an engine that can automate the generation of new configurations (based on the limitations of movement, mentioned.)